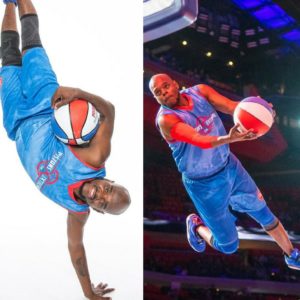 Corey “Mission” Whitfield
Born January 30 1985, from Detroit Michigan. Corey has been Dancing since the age of 5 and Tumbling since the age of 7 . With no formal training, Corey has climbed his way to the top in the hip hop scene around the country. With 12 years of power tumbling and trampoline training, Corey made his way to be apart of the U.S. Mens National Team for Power Tumbling and Double Mini Trampoline. During his Gymanstics career, he had numerous regional and state titles, 3 national placement in the top 3 and 2 National Champion Titles. He also placed 4th at the Pan American Champships. He has appeared on So You Think You Can Dance Season 10 and 12 making it all the way to the end of Vegas week before being cut. Corey is a former Detroit Pistons Acro Dunker/Dancer/Choreographer and former Director for the all male dance team D-Town for the Detroit Pistons. Corey has coached multiple hip hop teams at dance studios that have captured many national titles. He has toured with the world famous “Harlem Globetrotters” where he toured all over the country as an Acro Dunker and Dancer/Choreographer. He also has traveled with the team USA Dunk Acro Dunking Team where he took third place in the world for acro dunking in Budapest, Hungary in 2019. He is well rounded in Hip Hop culture with such styles as breakdancing(Only True Dance Style of Hip Hop)  Popping, Waving, Locking, Animation, Krumping (Learning and Growing in the style), House Dancing, Hip Hop Party Dancing (Social Dance Moves) and Tutting.